AnyList Review: Get to Know the Grocery App

Organizing and building grocery lists was once an experience reserved exclusively for the pen and paper. Clever shoppers would make sure to jot down everything they need for the week, lest they forget and this is a habit that has lasted through the years. As the world develops technologically, many pastimes that were deemed as necessary are being relegated to artificial intelligence and smart technology. Grocery list app shopping is no different, and people living in the modern era have the option of delegating the responsibility of organizing their meals for the week to whichever smart device is the closest to them at the time.

With multi-platform capability, the AnyList app is a revolution in list making. It has a built-in database of food items that users can utilize when making their lists. They also have the option of manually inputting ingredients not stored within the app, a feature that is especially true for users who use specialized or regional ingredients. The app also allows users to copy paste entire recipes from the internet, or manually type in recipes, which they can later share with their family and friends.

AnyList is powerful software that turns to organize weekly meal prepping and grocery shopping from a chore into a ready-made list for users. A free software, all users need is a working e-mail address to open the doors to effective food organization and planning.

What are the best features of the AnyList app?

AnyList is a powerful tool for organizing weekly cooking and groceries. It is simple to use and effectively takes care of illustrating grocery lists and storing recipes for the user. In addition to this, AnyList also lets users make different lists according to their needs, which are all displayed in an effective manner to ensure clarity. Users can make lists for everything and anything from beverages to breakfast foods, meat to bread, dinner to celebrations and more. 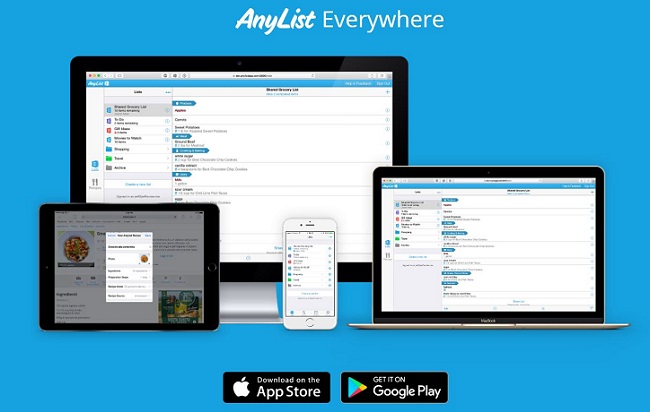 The information stored on the AnyList app is synced with the cloud and ensures that users retain all their data no matter what. AnyList is a service that is a highly recommended app for anyone who takes organizing food seriously.

People who have used AnyList had positive reviews about the app; some Google Play users had this to say about AnyList:

- "LOVE THIS app. Anylist is robust, extremely customizable, and well thought out. I love cooking, but with 3 little kids we dread meal planning and shopping. So, I downloaded 10 shopping list apps searching for something magical. Anylist was the winner and delivered the magic! I shop at many stores and try to stick to a budget and Anylist makes those things so much easier. AND I'm happy to report meal planning and recipe organization feels SO much easier. Plus, it's very very affordable. THANK YOU!!"

- "So easy to use and can import any recipe from anywhere online. 5 free recipes is more than enough for a weekly shop. Very useful app, I've been looking for something this for ages."

- "Love, love, love this app after trying many others. Easy to use, easy to manage, easy and quick to use while shopping. Great time saver. Big plus now that it is also available for Android!"

- "I use Anylist as my only organizer! I manage tons of projects which means a lot of lists. Over 600 to do items at any given time. This skill has helped me when a brain storm hits, to be able to add it to the appropriate list right away, from wherever I am in my home office. With an Alexa enabled sevice of course. Only thing missing is, Anylist does not have a feature yet (I’ve suggested multiple times) that will allow the list to be sorted by the order in which you dictate them. I want the last entered item at the top of the list. The only options now is alphabetical or it puts the item at the bottom. Then you have to drag it to the top or where you want it."

- "I subscribed to AnyList family thinking I could get my elderly parents to just add items via the app. Having the ability to just say “Alexa add ...” is awesome. The fact that it automatically updates all of us is a bonus. Even better is how my Apple Watch goes “bong” and tells me when my list has been modified. I can literally be at the grocery store and have items added without having to stop and take a call. No more trying to decipher texts from the spelling challenged either!

As for whining about privacy, that went away when we entered the digital world. If you want privacy, stop using mobile devices, computers, Amazon Echo, etc. It is the price you pay for technological convenience. There’s no reason to leave a bad review because of it."

Where is My Tax Refund? Learn how to Get a Tax Refund