What is the Law on Bribery In New York and What are the Punishments for it?

We are seeing bribery in our day-to-day activities. Passing on a few dollars to get things done quickly which otherwise would require enough time and effort from our side constitutes to bribery. The important question is whether the act of bribery is taken seriously? The crime of bribery is a serious offense in New York which can declare a person involved in bribery as a criminal and the person can end up in a jail serving a jail term of up to 25 years. In New York, the laws of bribery take into account many factors and the important factor is whether who is bribed is a citizen or a public servant.

The two main categories of bribery in New York

Under the New York penal laws, the crime of bribery has two main categories. These categories are based on whether citizens or public servants are involved in the bribery. The person can be penalized for bribery either for offering a bribe or attempts to offer a bribe, or he can also be penalized for accepting or attempting to accept offered to him.

The law considers the crime of bribery as a felony and is classified into A, B, C, D, and E felonies, with felony A being the most severe. Also, under New York laws, if the giving and accepting a bribe involves a public servant then it is considered as more severe and the punishments are also equally harsh compared to the involvement of a common citizen was depending on the circumstances, the court can rule out a less severe judgment.

The crime of bribery involving a public servant caught either receiving or offering, or attempting to receive or offer, has been covered under Article 200 of the New York penal law. The court considers the circumstances at the moment the bribery had taken place and then decides the felony.

A public servant who agrees to accept, solicits, or accepts a bribe (or a benefit) from another person constitutes the offense of bribe. It is categorized into Class B, Class C, and Class D felonies depending on whether the bribe was received in the first, second, and third degree respectively.

The offense of bribery involving non-public servants (citizens) are categorized into the main sections as follows:

Bribe involving sports: both giving and receiving bribe during a sport is a Class D felony. But if a bribe is offered or accepted to tamper a sports a contest, it is a Class E felony or a Class A Misdemeanor depending on whether it is a first or second-degree offense respectively. 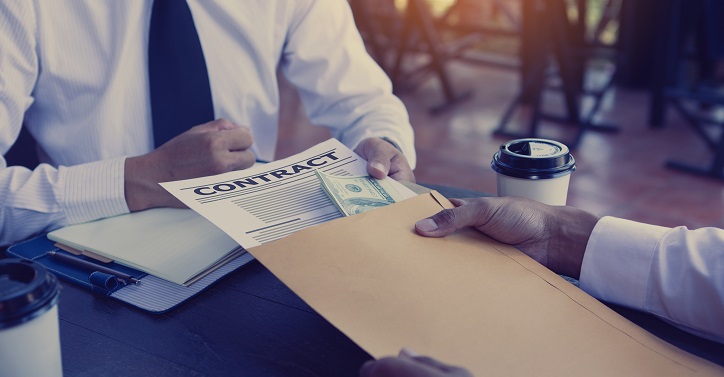 Punishments for bribery in New York

The first-degree crime of bribery entitles a person to a minimum 1-3 years of kai sentence with a maximum of 8-25 prison term. The court considers whether the person is an established felon and the charges are decided appropriately.

Third-Degree bribery usually carries a sentence of 3 to 7 years imprisonment in a city or a county jail.

Depending on the circumstance of the bribery, a verdict involving imprisonment and probation can also be granted.