What is the Law on Bribery in Tennessee and what are the Punishments for it?

Bribery is regarded as a serious criminal offense not only in many states in the United States of America but in Tennessee. After all, the state regards it as an act of corruption for the justice systems. The statutes are in place so that public servants such as police officers function in a way in which law sets the standards without undue or unfair influence imposed by other parties in the state. Hence, any person who makes an attempt to offer money in order to escape a police arrest is actually ensuring that he/she is arrested on the charge of bribery alone in Tennessee.

According to the law of Tennessee, bribery, when convicted, is considered as a felony of type Class B. The state’s judicial system considers its private citizens to have committed an act of bribery when they tried to provide any kind of pecuniary benefit to its public servants to avoid an action, which the officer could have otherwise taken within their official capacity or authority.

Some common instances of bribery in the state of Tennessee are when a person makes an attempt to redirect the judgment of an official on an issue, influences an officer to cast his or her vote in a certain manner or instigates the use of discretion of a public servant.

Following are some of the important terms used in the bribery code of Tennessee:

1. Pecuniary benefit: It refers to benefit like commercial interests, property, money, or any other item of value with the key intention of economic gain.

2. Benefit: It refers to anything that is considered as an economic advantage, enhancement, or gain to any other individual in whose well being the beneficiary is keen.

3. Public servant: Refers to:
4. Person: Is used in both singular and plural form and constitutes entities like any firm, individual, co-partnership, partnership, corporation, association, governmental agency or subdivision or other legal entity, its agent or servant.


The state considers a behavior as an act of bribery in any of the following scenarios:

1. When a public servant agrees to accept, accepts, or solicits any pecuniary benefit with an understanding or agreement that the judgment, opinion, the exercise of discretion, vote, or other act to influence someone as a public officer; or

2. Agrees to confer, confers, or offers any kind of pecuniary benefit on a public official with the aim of influencing the exercise of discretion, judgment, opinion, or vote of the public servant in his/her official capacity. 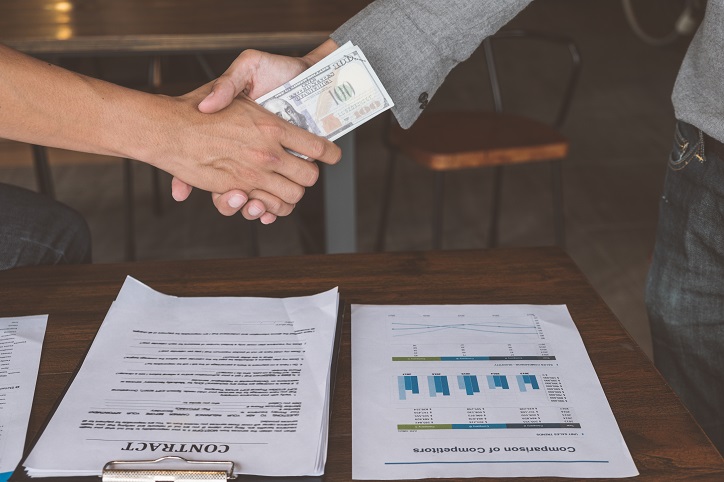 Punishments for bribery in Tennessee

According to laws of Tennessee, the offense for a public servant found guilty of an act of bribery is a Class B felony.

Extortion takes place when a person uses threats for forcing some other person to behave in a manner, which is beneficial to the individual who is issuing such threats. Such a benefit can be financial or it can be also for some other type of merit. The act has to be such that the victim should never agree to do it except for the threats.

Bribery is a similar concept and yet there are differences between extortion and bribery. The major distinction between the two offenses is that bribery involves a reward to coerce compliance while extortion makes use of negative acts.

Also, it is imperative to note that bribery will be only considered as a criminal offense when it includes people who hold positions of authority or government officials.