Michael Gerard Tyson, an American former boxer, who competed professionally from 1985 - 2005, was born in 1966 in New York City. He is the first heavyweight boxing champion to have won a world championship title at a young age - he was 20 years, 4 months and 22 days old. His first 19 fights were all won by knockout punches - 12 of them were won in the first round itself.

His nicknames are "Iron", "Dynamite Kid", and "Baddest Man on the Planet." He was born in Brooklyn, and his biological father, of which not a lot is known, is listed as Purcell Tyson on his birth certificate. He has an elder brother and had an elder sister who passed away at the age of 24. The man that Tyson acknowledges as his father was Jimmy Kirkpatrick.

He met Tyson's mother, after leaving behind his family in North Carolina. Tyson's mother, Lorna Mae Tyson, was left high and dry to look after the family when Kirkpatrick left her around the time of Tyson's birth. When Tyson was 10, he went to live in Brownsville. His mother died six years after the move. He was left to be cared for by Cus D'Amato, who would become his legal guardian later on. 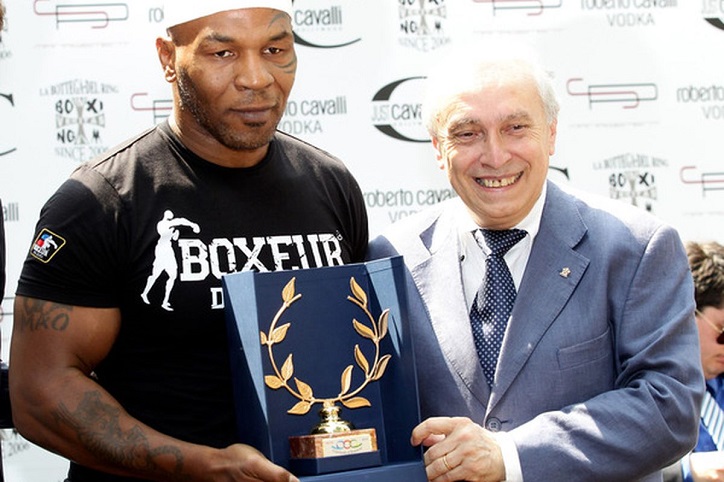 He was a boxing manager and trainer and took Tyson under his wing. Tyson claims that he never knew his mother as well as he should have and regrets this. Right through his childhood, he lived in localities that were high in crime. He was always getting into fights with street children who bullied him as he had a lisp and a high-pitched voice.

By age 13, Tyson had been arrested close to 30 times, finally ending up at the Tryon School in New York. Though everyone around him knew he had raw boxing talent, it was only formally noticed by Bobby Stewart, a juvenile detention counselor and a former boxer himself. Tyson dropped out of high school when he was a junior. He started to train as a boxer.

Kevin Rooney also trained him, under the guidance of Cus D’Amato. Tyson was awarded an honorary doctorate in Humane Letters from Central State University in 1989. He has had three marriages, the last one to Kiki Spicer, in 2009.

In 1988, Tyson knocked out Michael Spinks within 91 seconds of Round 1. Defending his titles nine times, winning matches with Larry Holmes and Frank Bruno, Tyson maintained his reputation as a boxer. He defeated Ruddock twice in 1991. In 1996, Tyson won both the WBC and WBA titles, totally wiping out Frank Bruno and Bruce Seldon.

With these victories, Tyson joined the exclusive circle of boxers like Muhammad Ali, Evander Holyfield, and George Foreman as the men in the boxing world to have recovered a heavyweight championship title after losing it.

Tyson was notorious in the boxing ring, with his ferocious and cruel boxing style, and his intimidation. Tyson, for all his aggression, has had setbacks during his career. In 1990, he lost titles to an unexpected opponent, Buster Douglas. He had to pull out of a fight with the then undisputed champion, Evander Holyfield after that - the reason was a broken rib. In 1995, after altercations with the law, he undertook a series of comeback fights. He restored his championship title.

Then he fought Evander Holyfield in a 1997 rematch and was disqualified for biting off Holyfield’s ears. Tyson fought Lennox Lewis in 2002 - he was 35. He lost the match by knockout. He retired from professional boxing after that. In 2003, he declared bankruptcy. This was ironic considering he had won over $30 million for most of his bouts, and another $300 million in the course of his career.

In 1991, Tyson was arrested for the rape of Desiree Washington, in a hotel room. She was 18. He was convicted in 1992, after evidence was corroborated, by a jury. He was sentenced to six years in prison with four years of probation time. Due to his conviction, it is mandated that he register as a Tier II sex offender under federal law of the United States.