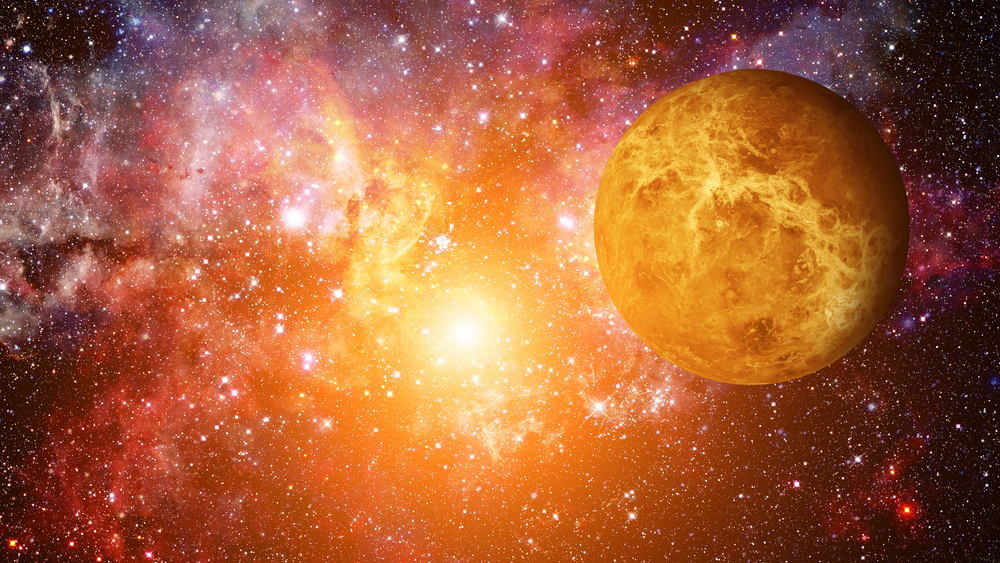 Venus’s mass and size are very similar to that of Earth, which is why it is often dubbed as Earth’s sister. It is the second planet from the Sun and one of the brightest objects in the night sky from the moon. The planet was named after the Roman goddess of beauty, Venus, which is ironic because it’s atmosphere that comprises of fiery and toxic gases is anything but friendly. Here are some interesting facts about Venus.

1. Venus has more volcanoes than any other planet: Venus has 1,600 known volcanoes, which is more than on any other planet. Scientists believe there can be more of them, but are not visible due to their small size. While most volcanoes are dormant, some of them are believed to be active. Venus is also home to a number of mountains and valleys.

2. A day on Venus is longer than a year: Venus takes around 243 Earth days to complete one rotation, while a single revolution is completed in about 225 Earth days. Scientists believe that a collision in the past may have caused the planet to rotate slowly.

4.Venus experiences superfast winds: Winds on the middle cloud layer of Venus can reach a speed of up to 450 mph, which is way more than that of the fastest tornadoes that have swept Earth.

5. Acid rains are common on Venus: Sulfuric acid found in abundance in Venus’s atmosphere, condenses into Sulphur and often returns back to it in the form of acid rain. However, Sulphur never reaches the planet’s surface as it is evaporated midway.

6. Venus does not have any seasons: Due to the tilt on its axis, there are no seasonal variations on Venus. The planet just remains hot all the time.

7. Venus is the brightest planet in our sky: Due to Venus’s proximity to Earth, the planet is clearly visible in the night sky. In fact, it is the second brightest object, after the moon. Venus is so bright that once an Air Canada pilot mistook the planet to be an incoming aircraft and tried to execute an emergency dive to avoid collision.

8. Venus was once just like Earth: Scientists believe that billions of years ago Venus was just like Earth. The planet had a number of water bodies such as oceans. With time, the level of greenhouse gases in the planet’s atmosphere increased, thereby resulting in a rise in its temperature. Gradually the temperature rose to a point that all the water bodies were evaporated.

9. Venus is often dubbed as the Evening Star and the Morning Star: Ancient Greeks and Romans mistook Venus to be two different bodies. The confusion was created due to its orbit. Normally, Venus is visible during night, however, when the orbit of the planet overtakes that of Earth’s, Venus starts being visible before sunrise. While ancient Romans called Venus, Lucifer and Vesper, ancient Greeks named the planet Phosphorus and Hesperus.

10. Venus’s gravity is less than that of Earth’s: If scientists ever find a way to survive on Venus, we are sure people obsessed with weight loss will be the first ones to move to the planet. An average person will weigh 12 percent less on Venus than on Earth. The difference is due to Venus’s force of gravity that is less than the Earth’s.