Most Wanted Terrorists by the FBI
The word terrorism seems to hide many different crimes. We have heard this word late in the last few years, but what does it really mean? Terrorism refers to violence against civilians, for political purposes. It also means the use of violence in peacetime against non-combatants. The term terrorism started to appear during the French Revolution and gained popularity in the seventies. It became very popular since the terror attack of September 11, 2001. Between 2000 and 2014, 140,000 people died because of terrorism.
The FBI published a most wanted terrorist list to point out the most wanted terrorists charged with federal crimes in the United States. The FBI offers rewards for any information leading to the arrest of these terrorists. They are 28 on the list. Learn about these most wanted terrorists and their stories! 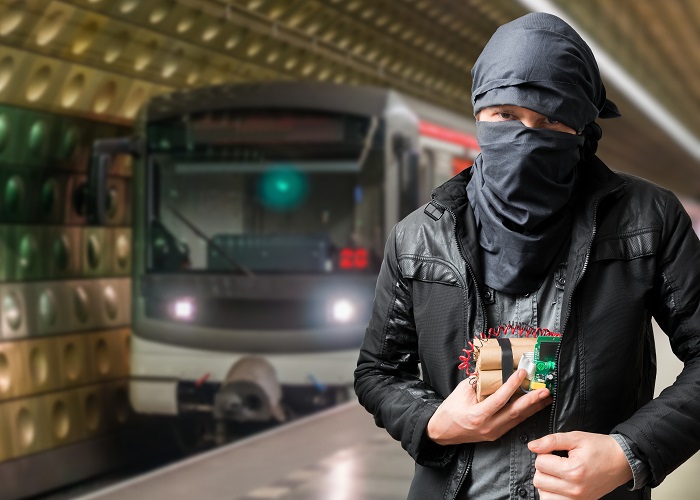 Jaber A. Elbaneh also is known as Gabr al-Bana is a Yemeni-American terrorist, trained in the Al-Farouq training camp. He is involved in many terrorist attacks. He is charged with providing material support to a terrorist organization and conspiring to provide material support specifically to Al-Quaeda. He escaped in a mass breakout with some other high-profile prisoners. He was last known to be in Yemen. A Reward of $5 million is offered by the FBI for information leading to his arrest. 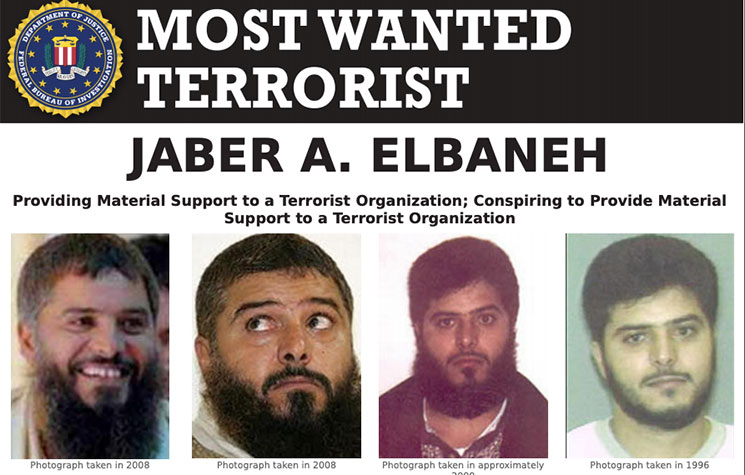 Al-Yacoub is a Saudi Arabian terrorists and an alleged member of the terrorist organization, Saudi Hizballah. He has a long list of charges against him such as Conspiracy to Kill U.S. Nationals or Conspiracy to Use Weapons of Mass Destruction Against U.S. Nationals, etc. He is particularly wanted since his role in the attack on the Khobar Towers complex in Saudi Arabia. The FBI offers a reward of $5 million for information leading directly to the apprehension or conviction of Al-Yacoub. 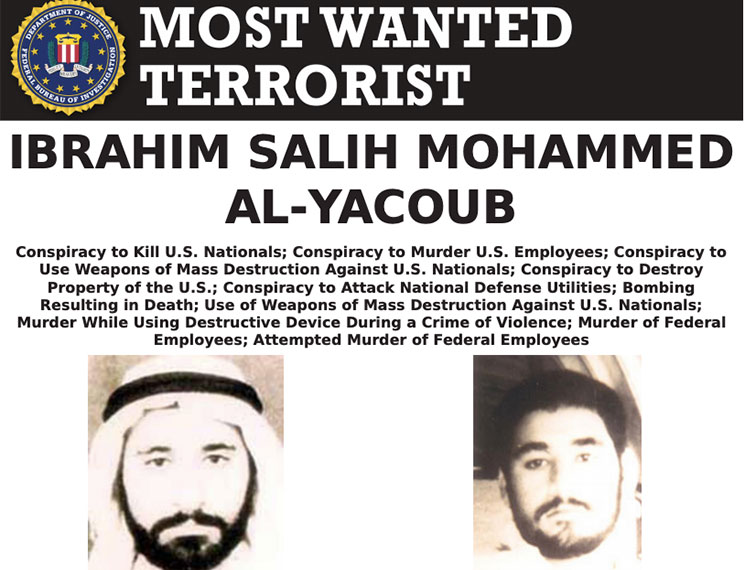 Jehad Serwan Mostafa is known is believed to be the highest-ranking U.S. citizen fighting overseas with a terrorist organization. He is originally from Wisconsin and has been raised in San Diego, California. When he was 23, after being graduated, he left the country for Yemen and Somalia in order to join the Shebabs, a terrorist organization in Somalia. He became one of the leaders of the organization, hurting and killing hundreds of innocent victims in Africa.
He has pledged allegiance to Al Qaeda and claimed responsibility for attacks that involve murder, kidnapping, and the use of weapons of mass destruction. He is also known for his speech during a news conference in which he pays tribute to Osama Bin Laden. The FBI offers a reward of up to $5 million for information leading to Jehad Serwan Mostafa's arrest. 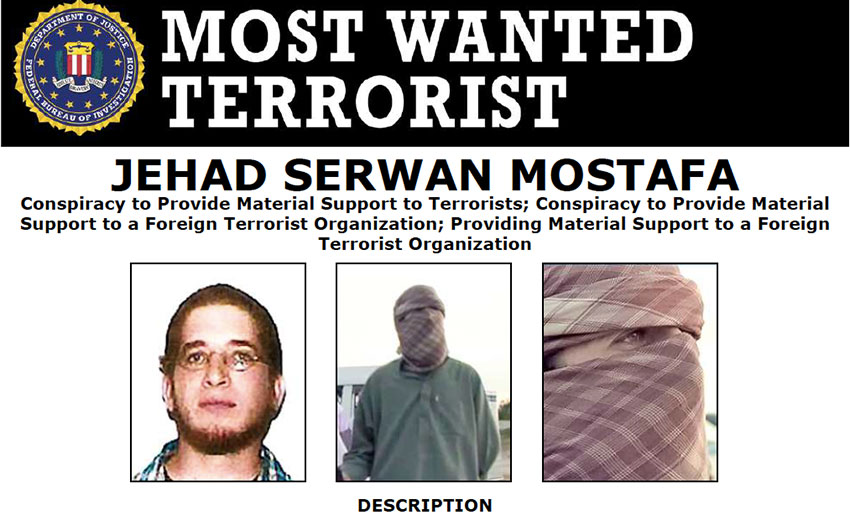 Mohammed Ali Hamadei, also known as "Castro" is a Lebanese terrorist. He is an alleged member of the terrorist organization, Lebanese Hizballah and is thought to be in Lebanon. He has been indicted for his role and participation in the hijacking of a commercial airliner in June 1985. For 17 days, TWA pilot John Testrake was forced to crisscross the Mediterranean with 153 passengers and crew members on board, from Beirut to Algiers and back again.

He is charged with aircraft piracy, the unlawful placing of a destructive device on an aircraft, hostage-taking, murder, assault on a passenger and conspiracy. The FBI offers a reward of up to $5 million for information leading to his apprehension or conviction. 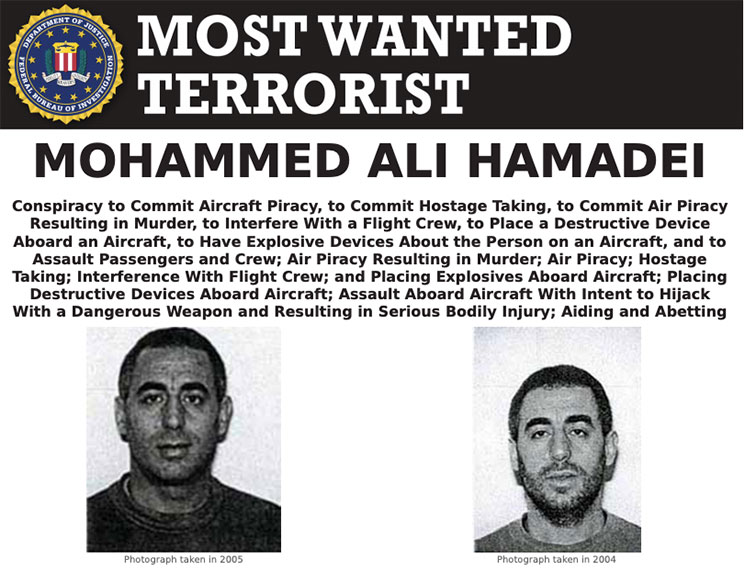 Raddulan Sahiron is a Filipino terrorist, he is known as the leader of a Philippines-based extremist organization called Abu Sayyaf Group. He has organized several attacks on tourists in the Philippines. He has lost a part of his right arm during a battle with Philippines security forces leading to the amputation of his forearm, since then he is known has Commander Putol (meaning cut off in Tagalog). He is wanted for his alleged involvement in the kidnapping of a United States Citizen. The victim was abducted from his residence by 14 armed members of the terrorist organization. He is thought to be located in his ancestral domain in Sulu Philippines. A reward of up to $1 million is offered for information leading to his arrest. 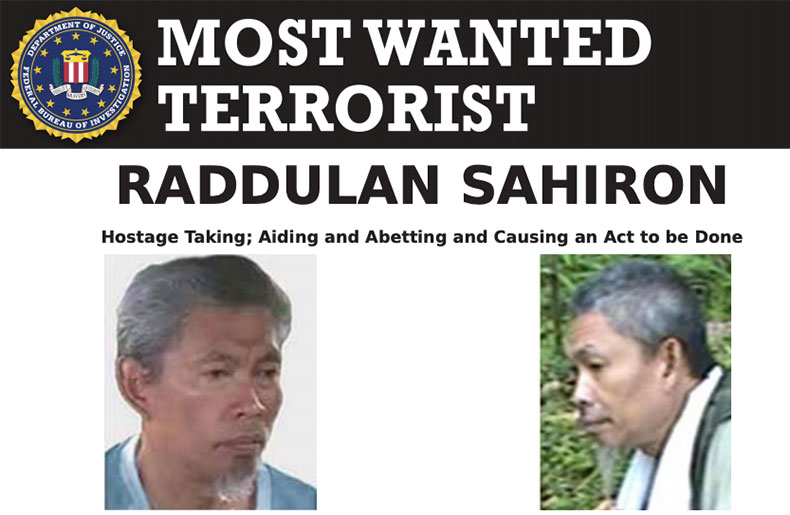 Abdullah Ahmed Abdullah is an Egyptian terrorist and a senior leader of al-Qaida. He is an experienced financial officer, facilitator and operational planner for al-Qaida. He is known for his role in bombings of the U.S. embassies in Dar es Salaam in Tanzania and Nairobi, Kenya. He provided military training to al Qaida operatives as well as Somali tribesmen. He is a head of terrorist organization, thus the FBI is offering a reward of up to $10 million for information leading directly to the apprehension or conviction of Abdullah Ahmed Abdullah. 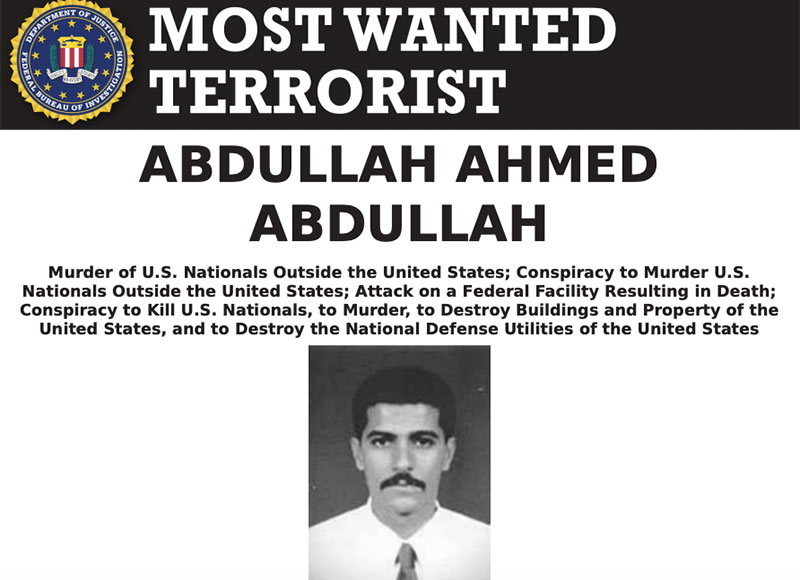 
Ramadan Abdullah Shallah is a Palestinian terrorist and the former secretary-general of Palestinian Islamic Jihad (PIJ) who led the group from 1995 until 2018. Under his rule, the group launched thousands of rockets at Israel from Gaza and carried out dozens of suicide bombings. He stated he would never recognize Israel and that there is no hope for a two-state solution. He is accused of providing material support to PIJ, of conspiracy to kill innocents, racketeering, immigration fraud, perjury, extortion, and obstruction of justice. He has a close link with Iran that provides funding and weapons. 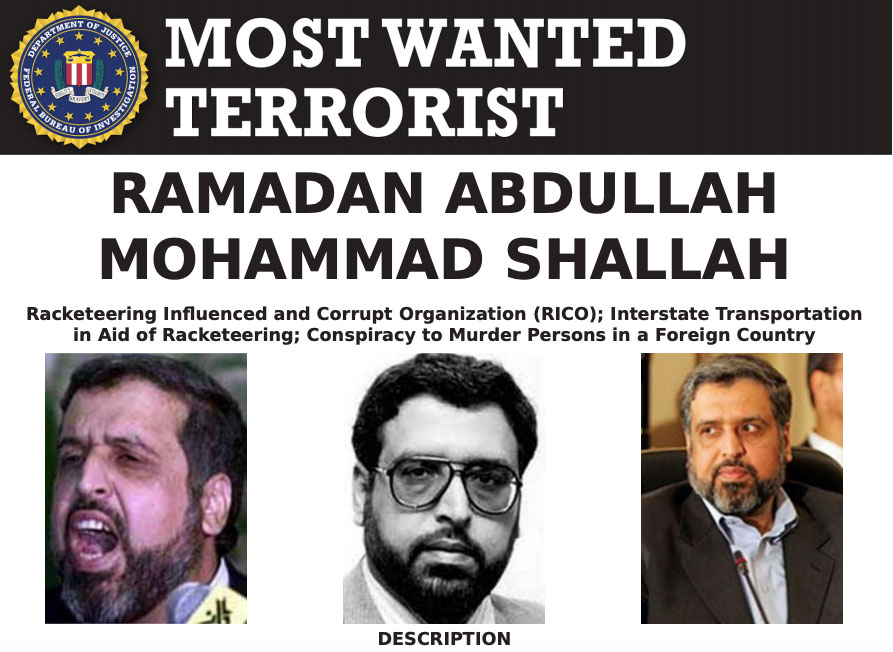 Hassan Izz-Al-Fin is a Lebanese terrorist, member of the Lebanese Hizbollah. He was indicted for his role in planning and participating in the June 14, 1985, hijacking of a commercial airliner which resulted in the assault on various passengers and crew members, and the murder of one United States citizen. He is a highly wanted fugitive and is thought to be hiding in Lebanon. A reward of up to $5 million is offered by the FBI for information leading to his arrest. 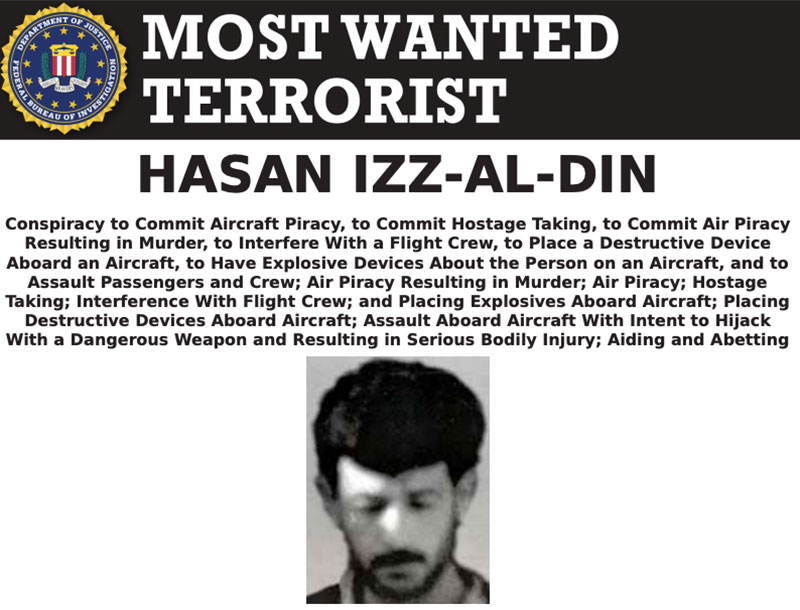 Abdelkarim Hussein Mohamed Al-Nasser is a Saudi Arabian terrorist, member of the Saudi Hizballah, wanted by the FBI in connection with 1996 Khobar Towers bombing. At this time, the complex was used to house U.S. military personnel. He is indicated with multiples charges and is highly wanted by the FBI, as a leader of Saudi Hizballah. A reward of up to $5 million is offered for information leading to his arrest. 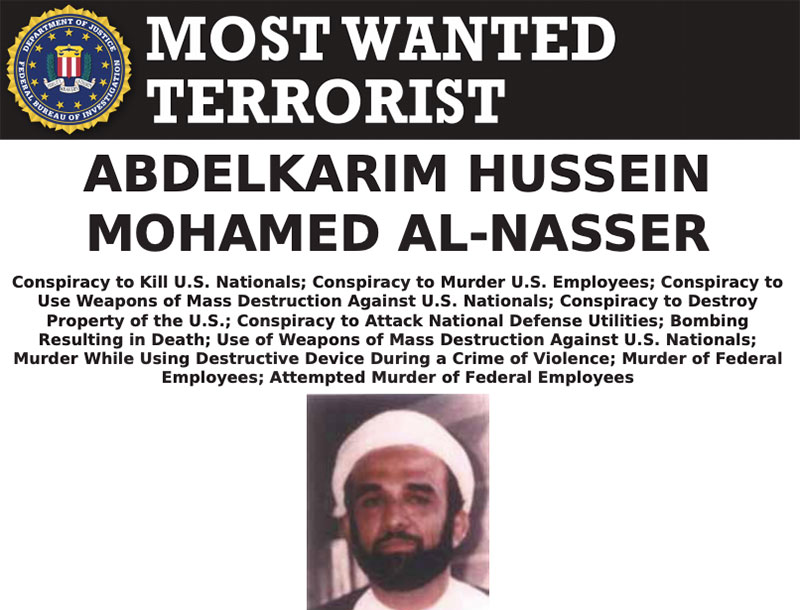 Ahlam Ahmad Al-Tamimi is a Jordanian terrorist known for participating in August 9, 2001, suicide bomb attack at a pizza restaurant in Jerusalem that killed 15 people, including two United States nationals. Four other United States nationals were among approximately 122 others injured in the attack. She is a journalist hosting a television show about Palestinians. She has been released as part of the Gilad Shalit prisoner exchange.

In an interview, Ahlam Ahmad Al-Tamimi described the reaction of other Palestinians immediately after the bombing:

"Afterwards, when I took the bus, the Palestinians around Damascus Gate [in Jerusalem] were all smiling. You could sense that everybody was happy. When I got on the bus, nobody knew that it was me who had led [the suicide bomber to the target]... I was feeling quite strange, because I had left [the bomber] 'Izz Al-Din behind, but inside the bus, they were all congratulating one another. They didn't even know one another, yet they were exchanging greetings...While I was sitting on the bus, the driver turned on the radio. But first, let me tell you about the gradual rise in the number of casualties. While I was on the bus and everybody was congratulating one another..." 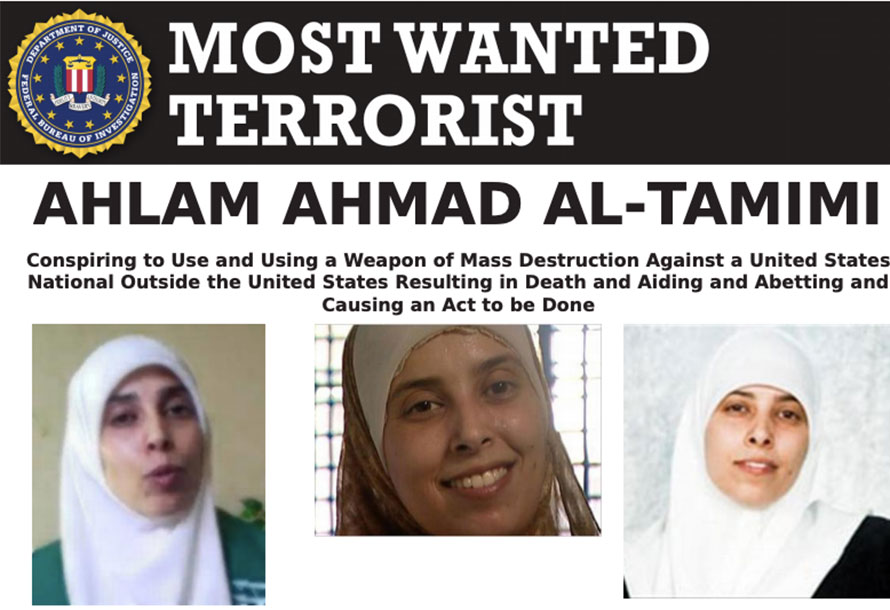 After hearing an initial report that "three people were killed" in the bombing, Tamimi stated:

"I admit that I was a bit disappointed because I had hoped for a larger toll. Yet when they said "three dead," I said: 'Allah be praised'...Two minutes later, they said on the radio that the number had increased to five. I wanted to hide my smile, but I just couldn't. Allah be praised, it was great. As the number of dead kept increasing, the passengers were applauding".

She kept saying in interviews that she was not sorry for what she has done and does not have any remorse. She is considered dangerous; the FBI is offering a reward of up to $5 million for information that leads to the arrest or conviction of Ahlam Ahmad al-Tamimi.

A Guide for Getting a Kansas Gun License

A Guide for Getting a Firearm License in Connecticut