A Rundown of the Best and Worst Dating Apps

The days of going out and meeting a potential love interest are nearly over, and we have dating apps to thank for that; back in the day, when online dating first started, many people thought that those who go online to find love are "desperate". But, in the past 10 years, things have changed a great deal, and 91% of single Americans have tried online dating. So, it's no wonder that the business of online dating is in full bloom with thousands of websites and apps that are solely dedicated to the art of finding love. A large number of dating apps and websites begs the question which are the best and which are the worst? Where do you have the biggest chances of finding love? Now it's the time to find out with a ranking of dating apps ranked from worst to best: 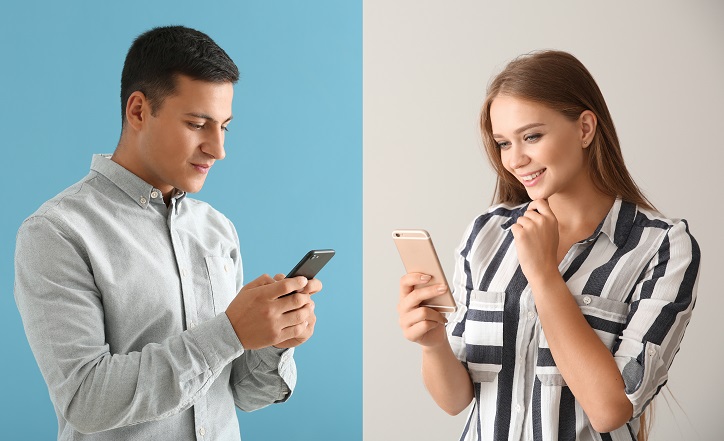 The league is intended for professionals, so it requires applicants to provide their profession and education. Based on applicants' professional profile, The League decided whether you will get to use the app. It even goes so far as to ask applicants to provide their LinkedIn profile. Then, applicants are screened and the team behind the app decides who will be excepted to The League. The concept behind the app is to screen applicants, which is good, but the chosen ones are the "elite", so the app is definitely not for everyone. Other cons of the app are that it is not very good, most of its users can be found on other apps, so jumping through hoops is not always necessary. Also, the app's premium content system is expensive so not everyone can afford it. To sum it up, the biggest draw-back of The League is it is very, very exclusive. It means that there are very little fake accounts, but it also means that most people can't get on it, which is not a big confidence booster. 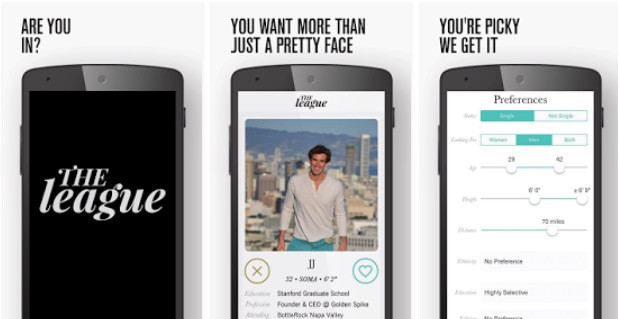 If you are searching for a hook-up date, Pure is perfect for you; people who use the app do not try to hide their intent, so you can find a casual date without beating around the bush. The sensitive nature of the app is taken into consideration, so users do not have to worry about their privacy. However, the free app has faults that deter many people from using it. Pure limits the free use to five requests that each one can only last an hour. Also, users can upload a single photo, so you won't have much to go on when choosing your matches.

The premise of Coffee Meets Bagel is pretty damn cute; every day at noon, the app sends users with matches that could be right for them. Then, users can choose the people they can hit it off with, and they can start chatting with their matches. Coffee Meets Bagel matches people based on their Facebook activities, so you can find matches who like the same things as you, which is a great starting point. So, the app curates users for you and matches you with people instead of you having to go through an endless number of profiles to meet your match. While the concept behind Coffee Meets Bagel is great, the execution leaves something to be desired. The best thing about Coffee Meets Bagel is also its downfall – it limits the users' number of choices. Also, the app heavily relies on Facebook activity, so if you are not a frequent visitor of the social media site, you might be out of luck.

Clover main intent is to get people to stop wasting time chatting back and forth, and set up a date as quickly as possible. The people who use Clover are supposed to schedule a date as soon as possible, and they can find their matches based on common interests. However, the app is less suitable for people who are looking for something long term, and it is best for those who want to find someone for the night. A few other cons of Clover is that a lot if users on it use the app as a fetish hookup hot spot, and not many people are familiar with it, so it is pretty hard to find a match when using clover. 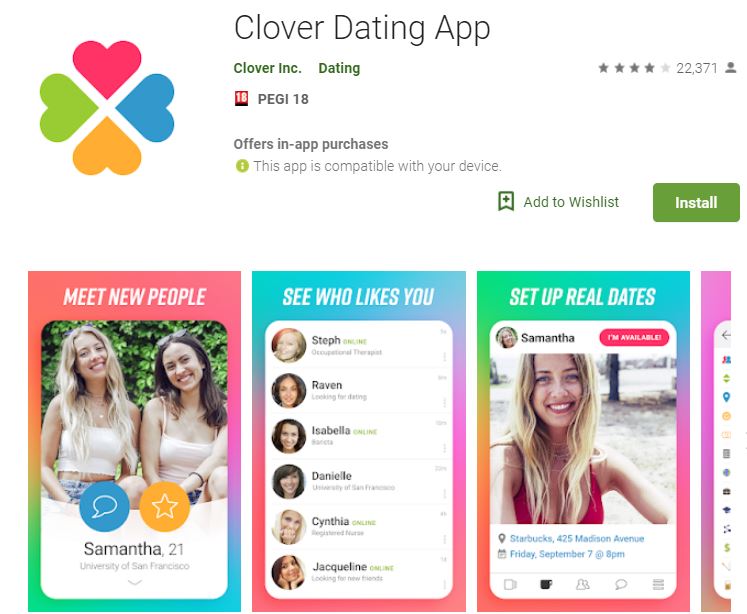 Blendr is another app that is mostly intended for people who are looking for hookups more than serious relationships. That's why it's no wonder that the app is referred to as " heterosexual version of Grindr", but the truth is that it's Grindr for everyone. So, if you are looking for someone for the long run, Blendr might not be for you. While the app is intended for young people and not necessarily for a hookup, Blendr is used mostly by those who are less than serious about relationships. This caused some shady people to go on the app and look for a hookup, so you need to be careful about who you talk to when using Blendr. The app is easy to use, but it's not suitable for people who are over 30 or those who are searching for that special someone.

Hinge is now considered one of the best dating apps, and its simplicity is one of the features that makes it so popular. The app makes matches based on Facebook friendships, so users can meet friends of friends that share their interests. Thanks to this feature, users can be certain they are matched with people who have a verified profile, and not online scammers. The biggest concern with Hinge is that possibly it shares information on Facebook. Most of the app's users are happy with it, so no wonder it is considered as one of the best dating apps these days.

OkCupid is deserving of the title "one of the best dating apps" because it tries to make matches made in heaven; the app uses an algorithm to match people, so it's not a swipe left-or-right kind of service. Users who want to get on OkCupid answer a series of questions, and the algorithm is applied to match like-minded people. When there's a match, the two parties can start talking, and decide whether they want to meet. OkCupid was purchased by the Match corporation, a move that made some services that were once free become paid-per services. Now, those who want to see who liked their profiles have to pay for the service, but at least the catting feature is still free.

Match was founded in 1993, so it had time to improve and become one of the best dating apps and dating sites these days. As of 2019, Match has the largest member pool, which can increase users' chances of meeting their right match. People who use the app are very satisfied with it, especially considering that most users are seeking for a serious relationship. The minimum subscription fee for Match is $21.99, but many agree that it is a small price to pay for the chance of finding a lasting love connection.

No dating app list is complete without eHarmony that was also established in the 1990s. As one of the best online dating sites and best dating apps, eHarmony has a lot to offer those who want to find a match. Like with other serious dating apps, eHarmony requires users to fill out a questionnaire when they sign up for the service. Afterward, users are matched based on their personality and preferences, so there is a big chance of finding a serious match on eHarmony. Some users are not too happy with the fact that they cannot choose their matches and that instead, the matches are sent to them, but who knows? Maybe an algorithm can make better decisions for us when it comes to love.

With dating app being responsible for more than 17% of marriages in the country, it's no wonder that millions of Americans are using them to find love. When choosing a dating app or dating website, you need to ask yourself what you are searching for. If you want to use a simple app that will provide you with a nightly hookup, the "worst" dating apps are right for you. If you want to find a long-term relationship, you should give the best dating apps a shot.

Whatever you choose, it's important for you to keep yourself safe. There are plenty of fake online profiles, and with more than 50% of online dating website users admitting they have lied on their profile, you can never be too careful. By performing a quick and simple dating background check, you'll be able to find out your potential date's real name, aliases, birth date, marital status, criminal records, and much more. In a matter of minutes, you will be able to find out the truth behind the dating profiles and save yourself time and heartache. 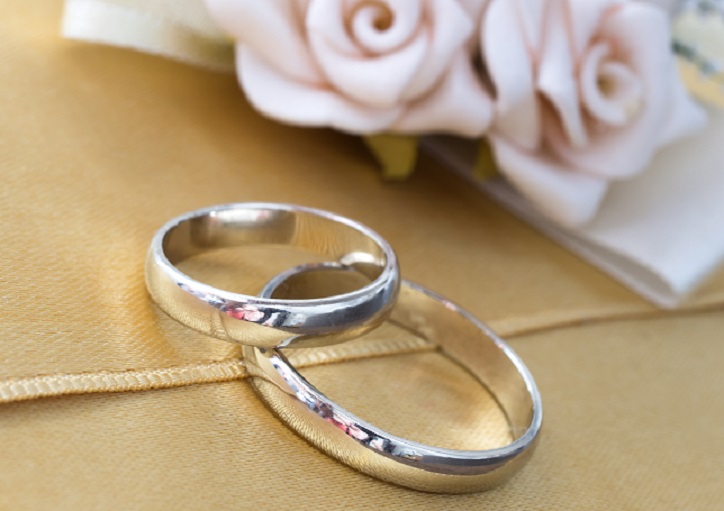 Marriage Records Utah: We explain how to find marriage records in Utah.

Marriage Records Utah: We explain how to find marriage records in Utah. 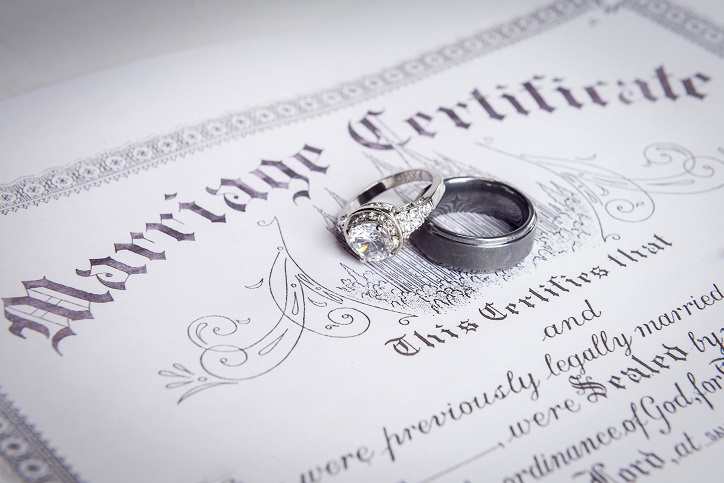 Marriage Records Vermont: We explain how to find marriage records in Vermont.

Marriage Records Vermont: We explain how to find marriage records in Vermont.