What is the Law on Riot in Alabama and What are the Punishments for it?

A kind of civil order, riot usually refers to a group of people causing a substantial public disturbance against other people, property, or lawful authorities. Typically riots comprise of damage of property, vandalism, and theft. The property damaged due to a riot can be either private or public. Also, the kind of property that is targeted may vary based on the rioters’ inclinations and the riot. Targets of a riot can be state-owned institutions, eateries, religious buildings, cars, and shops. Most of the time, a riot occurs as a result of dissent or a grievance.

While people may try to control or lead a riot, they usually comprise of disorganized groups, which usually exhibit herd and chaotic behavior. Ideally, it is the police that deals with riots deploying techniques that vary from nation to nation. The risk of getting arrested for participating in a riot is more commonplace in comparison to severe penalties.

According to federal law, a riot has been described as a public disturbance that involves any or more of the following:

However, it is imperative to note here that every state in the United States of America defines a riot differently.

Definition of a Riot in Alabama

The state of Alabama defines a riot as follows:

An individual in Alabama is said to have committed the criminal offense of a riot if he/she wrongfully engages in violent and tumultuous conduct with at least five other persons and thus recklessly or intentionally creates or causes a serious risk of public alarm or terror.

The state regards a riot as a Class A misdemeanor.

Incite a Riot in Alabama

The phrase “to incite a riot” refers to carry on, participate in, encourage, promote or organize a riot and also comprises while not being limited to instigating or urging other people to participate in a riot and yet means that simply written or oral expression of belief or advocacy of ideas and not constituting acts of violence does not mean that the person is inciting a riot.

In Alabama, a person is said to have committed the criminal offense of inciting to riot when he/she urges, incites, solicits, or commands another individual to engage in violent and tumultuous conduct of a nature that could lead to a serious risk of public alarm or riot. 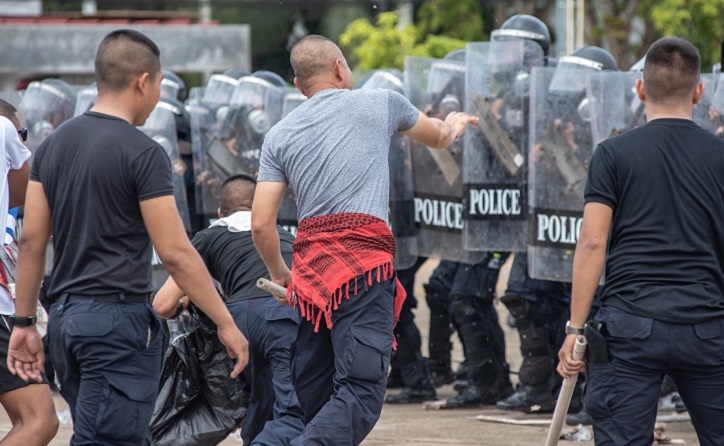 The state of Alabama considers inciting to riot as a Class A misdemeanor.

An individual in Alabama is said to have committed the offense of disorderly conduct when they have an intention to create public alarm, annoyance, or inconvenience or recklessly creates a risk by doing any of these activities: