What is the Law on Riot in Indiana and What are the Punishments for it?

As is often pointed out by experts, the human skin is the sheath behind which people hide their emotions. But at some point, people will not be able to control their emotions and this is perhaps the reason behind riots and civil disorders. If a riot happens, those who are involved in it cause public disturbance and vent their anger against the government, the authorities, or another group of people. In certain cases, rioters destroy properties and attack others as well. In a few other cases, vandalism and thefts also take place during riots. The properties that are targeted depending upon the nature of the riots and the intentions of those involved in them. In most of the riots, vehicles, shops, restaurants, religious buildings, or state-owned institutions, etc. are targeted.

Why do Riots Happen?

When people start expressing their bundled-up emotions such as anger, when they want to ventilate their grievances, or when people have a dissenting opinion other than what the authorities have decided, they engage in riots. A peek into history reveals that in most of the riots, poor people living in bad living conditions and the unemployed folks have taken an active part. If there are governmental oppression and heavy taxation, it also leads to riots. Similarly, differences between ethnic groups, races, religions, or the outcomes of sporting events can also lead to riots.

But regardless of the reasons, the fact remains that riots are dangerous and not good for society. In fact, by engaging in riots, people are taking law into their own hands. That is the reason lawmakers are not taking riots lightly. That is also the reason why they have put in place laws to prevent riots from happening. Lawmakers of the US government, as well as the governments of the states of the USA, have also put in place rules for preventing riots. Let us now look at the laws of riots in Indiana. 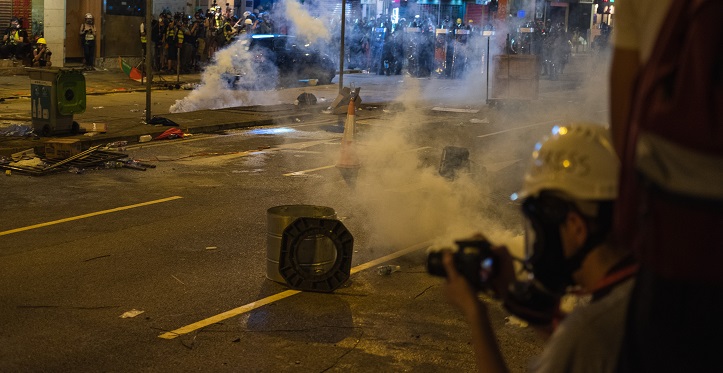 Every state of the USA has its own definition of riots. According to Indiana law, rioting is an unlawful assembling of people who engage in tumultuous conduct knowingly, intentionally, or recklessly. But what is tumultuous conduct? Tumultuous conduct is described as that conduct that is likely to result in serious physical injuries or substantial damages to properties. This conduct may involve stone-pelting, smashing the windows of stories, or setting fire to items such as trash cans, etc. Experts point out that such conduct is nothing but herd behavior, and that is the reason it leads to chaotic situations. In short, the negative impact of riots, both political and economic, can be very alarming.

Indiana laws categorically place rioting under Class A misdemeanor. But those who are engaged in rioting can be charged with felony crimes if they are suspected of engaging in the act while possessing or using deadly weapons.

Punishments for Rioting as per Indiana Laws

If riots happened before 1st July 2014 and if those who engaged in them were in possession of deadly weapons, they used to be classified under Class D felonies. The offenders would receive punishments of incarceration for a period between 6 months and 3 years and a fine of an amount up to $10,000.

After 1st July 2014, the punishments for riots are different. Those who engage in riots will be treated as criminals who commit Level 6 felonies if they are in possession of deadly weapons. They will receive punishments of incarceration for a period between 6 months and 2 ½ years and a fine of an amount up to $10,000.