What is the Law on Trespass in South Dakota and What are the Punishments for it?

The approach of the law-enforcing authorities in tackling and handling crimes seems to offer a number of lessons to other non-legal fields, especially the commercial field. As in the field of law enforcement, those who run their own businesses have to constantly monitor the changing situations and take appropriate steps for running their operations smoothly. The inference is that law-enforcing authorities cannot afford to sit quietly and become complacent.

In fact, the perpetrators of crimes will not allow them to sit at peace. As an expert puts it, criminals cleverly and superbly get themselves planted in the society for playing their favorite game at the appropriate time. However hard the governments and the law-enforcing authorities try, this will not cease. Hence the statement that these authorities can never afford to become complacent.

Crimes are of different types. But there are certain crimes that are carried out silently and surreptitiously. Trespass belongs to this group of crimes. Though countries like the USA have put in place several laws for curbing the menace of trespass, it keeps happening. In fact, the states of the USA have enacted trespass laws as well. Let us now look at the law on trespass in the state of South Dakota.

Why are Business Owners and Landowners afraid of Trespassing?

The main reason why business owners and landowners fear trespassing is that almost all of them are strongly and emotionally attached to their properties. They somehow want to protect their rights over their properties. That is the reason they are advised to put up appropriate signages on them. 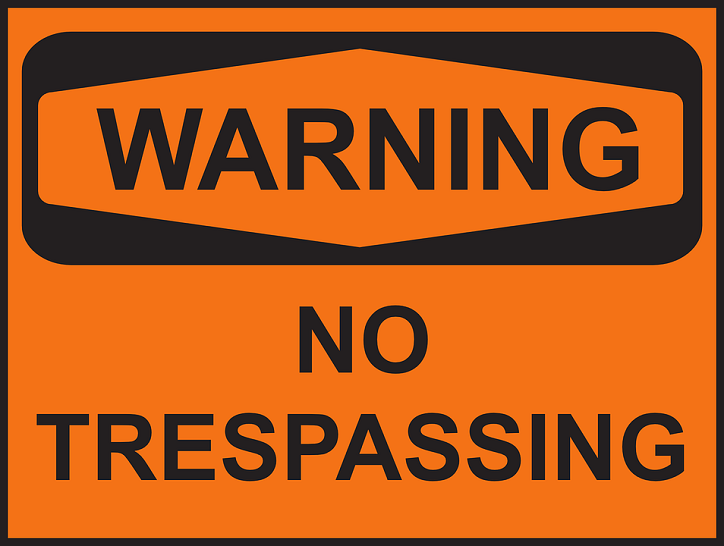 The lawmakers of every state of the USA including those of the state of South Dakota have laid down rules as to what type of signage has to be put up on properties. By putting up such signages, the owners will have a legal recourse so that they can protect their properties from ignorant intruders or malicious invaders.

Definition of Criminal Trespassing as per South Dakota Laws

There are slight variations in the trespass laws of the states of the USA. Some states have laid down basic laws while a few others require landowners and business owners to put up signages and to deliver notices with a lot of details on them. Yet another variation that is seen in the laws of the states pertains to the consequences of trespassing. A few state laws have put this crime under the category of a felony. There are states that have categorized trespassing as a misdemeanor. The distinction is mainly based on the prevailing situations and also the intentions of the trespassers.

South Dakoda laws on trespassing are very much similar to those of many other rural states. If a person enters a building or a structure stealthily, though he or she knows that he or she does not have the privilege to do so, he or she will be guilty of having committed criminal trespass. The offender will be convicted of having committed a Class 1 misdemeanor. But according to the state laws, the offender should be given notice before he or she commits the act. The notice should either be verbal or in the form of a posting that is likely to attract the attention of the offender.

Punishments for Trespassing according to South Dakota Laws

Offenders who are convicted of trespassing crime will get punishments of a fine, imprisonment for a certain period, or both. The state courts will decide on the quantum of the fine and the duration of imprisonment. A point that should never be overlooked by the offenders is that in most of the cases pertaining to criminal trespassing, the owners of the properties will have legal recourse that is of stronger nature, provided they have complied with the requirements legally stipulated for the verbal and written notices.