What is the law on Trespass in Wisconsin and what are the punishments for it?

In modern liberal democracies, as a bill of right were laid out and decentralization of power was carried out, it results in a fundamental right of property as well. Property has received a lot of importance in the earlier days, with it being criteria for being able to vote. All of that is a thing of the past, but the claim that someone has over their land remains supreme and anyone found tampering with it is liable to be charged with the crime of trespassing.

Trespassing can be defined in simple terms as entering and/or remaining in a land that is owned by someone else, without the consent or the permission of the landowner. Trespassing can be both civil and criminal, with the criminal one being enforced by police officers, sheriffs or other law enforcement agencies. It is very important that in the case of trespassing there is intently involved. Someone just wandering into someone's land unknowingly will not be treated as trespassing. In a similar situation if the land is not properly enclosed or secured, then it cannot be treated as a case of trespassing.

Interestingly consent may be explicit or implicit. Explicit consent is when the owner gives permission himself in writing or orally. Implicit consent may arise out of circumstances. If someone is injured or if someone needs medical help then consent is not required to enter into someone's property. Additionally, some might find this bizarre but the owner may be charged if the trespasser gets injured in the process. The trespasser may have some limited protection from the law. This might happen if the owner deliberately kept an unsafe condition on the property knowing that there are frequent trespassers or if the owner willfully injured the trespasser. 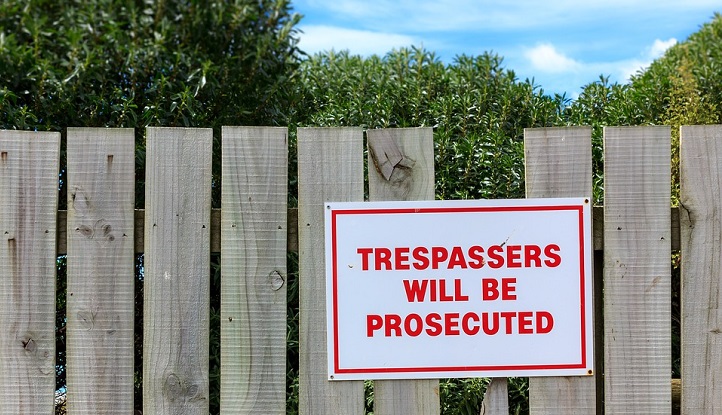 In the Wisconsin statute, the term that is used for a property is dwelling. It is understood as a home or a residence that is used by one person or more and is excluded from outsiders. It also includes dwelling even if they are not occupied by the resident. In the statute, it states the person would be charged with trespassing if he unlawfully enters upon the premises not owned by him without the consent of the resident present or not present on the property. Such a crime is classified as a Class A misdemeanor and carries a penalty of up to 9 months in jail or up to $10,000 fine or both.

Wisconsin statute also provides an explanation for one entering the premises of an energy provider. The energy provides may include within it a natural gas provider, a transmission company, a cooperative association, a wholesale merchant plant or a decommissioned nuclear power plant. It has to be owned, leased or operated by an energy provider. Whosoever enters the premises of such property without the consent and in an unlawful manner then the person may be charged with a Class H felony. This type of felony carries with it a fine of $10,000 or prison time of up to 6 years or both.

The next two chapters of the statute deal with trespassing related to a medical facility and a construction site. If anyone enters into these facilities without the consent of the owner with an intent to trespass then they may be charged with a Class B misdemeanor in the case of a medical facility and a Class A misdemeanor in the case of a construction site. Class B misdemeanor invites a penalty of 90 days in jail or a fine of $1,000 or both. As mentioned earlier Class A misdemeanour carries a penalty of up to 9 months in jail or a fine of up to $10,000 or both.