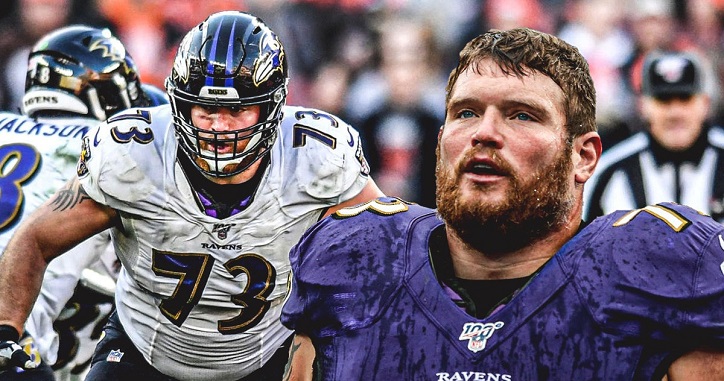 Marshal John Yanda, born September 15, 1984, is considered as one of the best offensive lineman ever seen in the American Football league, the NFL.

He remained with the Baltimore Ravens for 13 seasons till retirement & helped win the Super Bowl for his home team in 2012.

Born to Father John Yanda & Mother Ruth Yanda, Marshal Yanda, grew up doing farm work in their families Dairy Farm & was used to getting up early in the morning to milk their calves, along with his sister Katie.

His mom, Ruth Yanda, his biggest fan & most vocal critic, instilled farm work ethics in him in his early years making him responsible.

He was named the letterman in Track & Field, Basketball, etc., for his excellent performance in sports, in his School days at the Anamosa High School in Iowa. 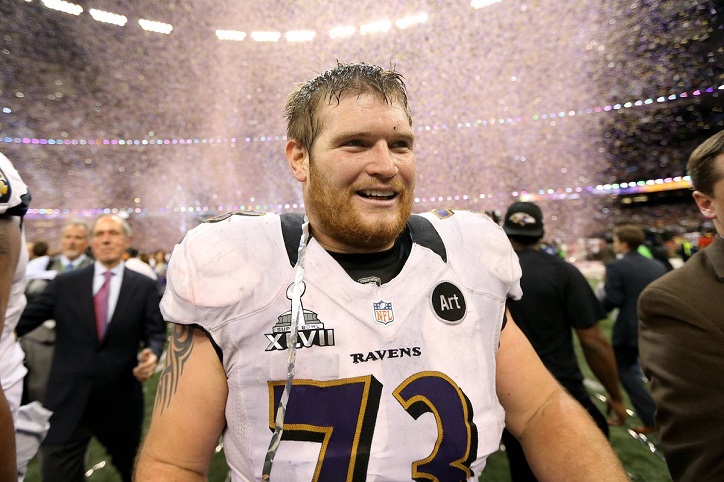 Marshal Yanda, in his initial first 2 years of college, started studying at the North Iowa Area Community College & also played for them.

It was in the 3rd year that Yanda got admitted to the University of Iowa through a sports scholarship to play for the college home team, the Iowa Hawkeyes Football team.

Marshal Yanda was selected by the Baltimore Ravens in the 2007 NFL draft by the third round for the offensive tackle position.

In his rookie year of 2007, Yanda played all the 16 games where he played 12 games from the beginning (12 starts) that NFL season, based on the performance of which Baltimore Ravens signed him for 3 years.

In his season 2008 of the NFL, Yanda’s participation was negated to only 5 out of the 16 games.

The 2009 NFL was much better for Marshal Yanda as he went on to play 9 games from the beginning as against the 16 matches of that season.
Marshal Yanda’s performance was touching great heights & in 2010, he played all the 16 games of that NFL season, by the end of which his contract period was to culminate.

The Baltimore Ravens re-signed Marshal Yanda in July 2011, based on his performances especially the one in 2010, only this time it was on a five-year contract basis.

The 2011 NFL season started with a bang for Marshal Yanda. He played in all the 16 games of that season & was selected to play for the AFC in the 2011 Pro Bowl all-star game.
2012 NFL season turned out to be another golden period for Marshal Yanda. That season even though he played only in 14 games from the beginning, he ended up winning for the Baltimore Ravens the Super Bowl XLVII & his first Championship Ring. 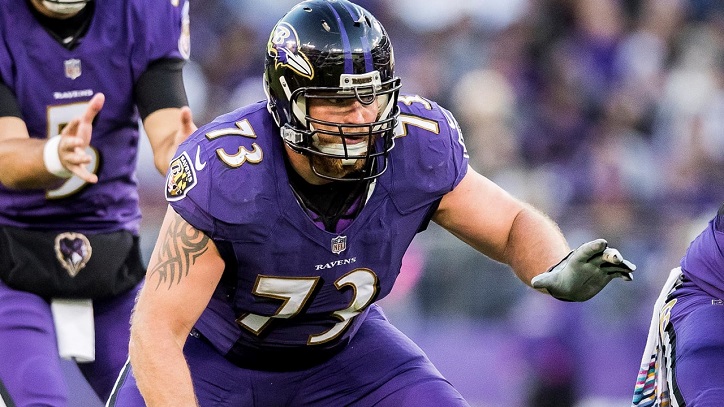 Marshal Yanda continued with his consistent performance in both the 2013 & 2014 seasons, playing all the 16 games without a break each season.

With the end of the contract period, in 2015 the Baltimore Ravens re-signed Marshal Yanda but this time for an extension of four years.

With his performance in the NFL continuously for the years of 2014, 2015, 2016, Marshal Yanda was the top-ranked guard by Pro Football Focus, and analysis & ranking website focused on the NFL.

Post-2016 NFL season, recognizing his achievement that season, he was designated to his Sixth Straight Pro Bowl Player but to be ranked as the 43rd player on the NFL Top 100 Players of 2017.

However, Marshal Yanda’s 2017 NFL season suddenly came to an end when he broke his ankle during a game.

He mostly missed out on all the games of the 2018 NFL season due to injury. In April 2019, the Baltimore Ravens signed a one-year extension with Yanda & in March 2020 he announced his retirement.

Marshal Yanda played for the Baltimore Ravens in the National Football League (NFL) continuously for 13 seasons.

Marshal Yanda married Shannon Hunt in 2011 & currently reside in Marion, Iowa, along with their 3 children.

iPhone 8 and iPhone 8 Plus: The Full Rundown on Apple's Flagships